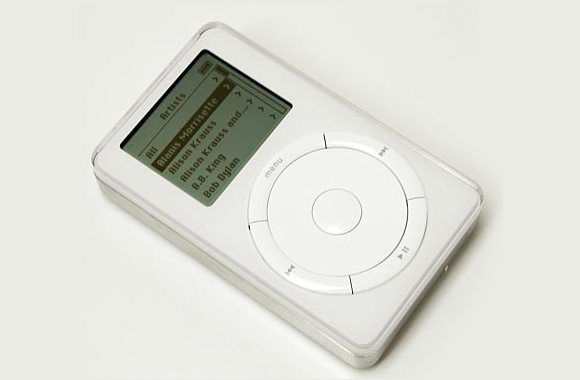 October marks the iPod’s 10th birthday, and since its inception, the way we listen to has been digitized, customized, and revolutionized. The iPod was developed because Steve Jobs, Apple’s founder and savior, deemed existing MP3 players to be too large, too slow, and error prone. First offered with a whopping 5 gigabytes of storage space and a price tag of $399, the first generation of iPods were only available to Mac users. Transferring music took hours on previous MP3 players, but with iPod’s Firewire connection, hundreds of songs could be transferred in minutes.

Finally, in 2002, Musicmatch made it possible to synch music between Windows PCs and iPod (Musicmatch and Apple’s partnership was discontinued in 2003 when iTunes was configured to work with Windows). Over 275 million iPods have been sold, accounting for over 70 percent of the market share for digital music players. Before iTunes media player, audio players for the Mac were limited and expensive. In 2000, Apple secured the rights to SoundJam, an audio player for the Mac. From there, Apple engineers redesigned SoundJam into what is present day iTunes (the app, not the store). iTunes was offered as a free download on January 9th, 2001.

If the iPod and iTunes weren’t enough to revolutionize music, the iTunes Store made sure there was no going back.

The iTunes Music Store (now just iTunes Store) launched on October 23rd, 2003, after gaining its foothold by signing a deal with five major music labels to begin distributing their artists’ music digitally (and legally, don’t forget about that whole Napster fiasco). Each song was offered at 99 cents each. Now, songs are either 69 cents, 99 cents, or $1.29. Since 2008, the iTunes Store has been the world’s number one music distributor with over 10 billion songs sold.

The iTunes Store now has over 18 million songs available. In July of 2011,221 million albums had been sold – 50 million of that was through digital sales. As you might guess, the record companies are not making as much as they used to. Now, music consumers have the option to choose single songs, not a whole album, which means that all of those songs that aren’t getting bought and downloaded are wastes of money to record execs. Apple earns about 30% from the music sold on iTunes – the other 70 goes to the record label and then to the artist.

Not only music is available through iTunes these days – Podcasts, television, movies, audio books, and games are all available now. The world was given a great source to distribute digital media and almost every industry has taken advantage.

iPod and iTunes weren’t the first of their kind, but they did something different that no other company was doing – their devices were (and still are) extremely user friendly. Apple and Steve Jobs knew what consumers wanted and how to design software and devices that can be picked up and figured out by almost anyone.

For better or for worse, the iPod and iTunes were the start of a music revolution that we’ve become so used to, the average consumer barely remembers a time before music could be purchased online. We’ve moved back to a culture that loves the single-serving song, no longer being forced to purchase a whole album if we don’t want to. Some artists have said that the traditional structure of the music industry is collapsing, as musicians no longer need a record label to sell their music. Artists can now directly post and sell their music on iTunes and the many other online music sites that have sprung up in the past 10 years.